Say hello to the SEQUEL

For the last few years we have been working with Epoch Lacrosse with designing of and R&D for the Hawk, and now we are so excited about the next one called the SEQUEL. It is Son of Hawk. The “laid Back” technology we have developed offers the offset advantages and a balance that lets you feel control almost like you are holding the ball in the palm of your hand. The Hawk Sequel is Universally legal for all levels of play.

The Epoch Sequel is the second head that Epoch has produced using my “Laid Back” technology. I suppose the name Sequel would give away that it isn’t the first. I have and will have much to say about the process and passion that many people put in to this project, but I will attempt here to just review the head like I would and do most all of them as they come out. Objectivity is my goal. I am not sure if I succeed or not.

The Epoch Sequel is the follow-up head for the Epoch Hawk, the second Epoch head made for men’s play.

At first glance my thought is that the Sequel has attractive look and elegant lines. The front face opening has a somewhat ‘pinched’ look even though it is universally legal, which means the throat opening is wider than HS heads at 3” legal minimum. Word is that rule will become more universal in the near future.

The Sequel head will take the pocket well anywhere, but it is certainly designed and perhaps sets up best with the pocket in the middle of the head

We (Epoch and Rock-it Pocket) are so excited about this next and new head called the SEQUEL. It is ‘Son of Hawk’. The “Laid Back” technology we have developed offers the offset advantages and adds balance and control that lets you feel almost like you are holding the ball in the palm of your hand. The maximum “offset” feel’ is all in one place, the ball spot place. This is different from other mainstream offset designs where the offset happens immediately and the bottom of the sidewall is exactly like and parallel to the top of the wall on every head on the market. That is all pretty much save one, and that one is the Hawk Sequel. The fact is that on the side wall of this one, the  measurement gets wider (low part of wall/eye line) by dropping its ‘bottom as it moves up toward the sweet, ball-sitting area. The end result is that the ball is sitting deeper into the pocket and farther away from a surface check than ALL other heads. On top of that, on almost all heads (Brine Edge offset would be one exception) the scoop always curves back up. Or forward toward the top, which further opens the world of whip and whip problems for throwing and shooting far more than the Sequel as well as the first one, the Sequel Father called the Hawk by Epoch as well. That one is a high pocket set up that has no whip, a rare occurrence sometimes.

Some stats and stuff:

Hole Placement –     There are (larger) holes to accommodate leathers. There are plenty of holes for easy mesh placement, and holes are protected on the both sides of the wall minimizing string fray. Hole placement gives stringer lots of subtle options. It is easy to place the mesh pocket in this head, maybe unlike the Hawk.

Face –     10” from tip of scoop to foam stop at throat, making it on the high measurement (long) side of that stat. Widest opening looks tight even at 6.5”, giving the head a narrow look in spite of being legal for all. The Epoch Sequel is universally legal (X)

Sidewalls –     The sidewall design is the cutting edge of “Laid Back” tech. The maximum ‘feel’ is where the ball sits. The top of the sidewalls are beveled in to encourage the ball into the head and pocket. The “Laid Back” top-of-the-wall line allows the pocket to be deeper than heads where the bottom of the sidewall mirrors the top, but with the scoop NOT curving forward there are also less pocket whipping possibilities.

Grab the Throat –     The engineers made the throat area durable but not weighty. The feel and balance of this head is great, and best when ball is in pocket. The throat area is really cool looking, too.

What’s the scoop –     The scooping blade surface is widest exactly in the center where more surface area helps the getting-the-ball-off-ground-safely-and-easily cause. The plastic side wall construction tapers into the scoop really smoothly. The angle of the Sequel scoop blade is great for getting ‘balls on the run’ with its subtle scoop surface curvature.

Stiffness –     The Sequel is pretty stiff, but also seems to have just a little ‘give’. The plastic technology is state of the art/science. I don’t have numbers, just the seat of my pants reckoning.

Dyes –     The plastic takes dye coloring really well, and the texture makes it seem to the eye and touch almost like the old Warrior Noz.

Features –     The recently patented “Laid Back” technology is designed to give the player that ‘hands on’ feeling where it is like holding the ball in the palm of his hand. There is more hold capability and way less whip chance than the now generic offsets, which are pretty much all of the other 100+ stick heads now available.

In spite of the fact that I designed the technology for this Epoch Sequel head just released by Epoch Lacrosse, it was the Epoch Lacrosse/Rock-it Pocket Lacrosse team that put their best foot forward for this project. Sequels often do not match an original, but this is an exception to that rule. The EPOCH SEQUEL had to be made. We hope you love it.

Company description goes like this, “Inspired by Italian supercars and engineered with maximum functionality The Hawk Sequel design and styling language is defined by the recurring triangular and polygonal elements incorporated throughout. The surfaces have precisely distinct sharp edges that flow together to form subtle yet pronounced corners that incorporate radiuses that are both appealing to the eyes and performance enhancing.

The Sequel’s elegant industrial design is only matched by it functionality and performance.  The Sequel’s beauty resembles a piece of art worthy of dedicated wall space but make no mistake about it; the Sequel is engineered for the field. 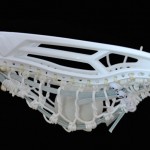 Laid Back Profile – The laid back profile and lowered scoop keeps the ball tucked under the shooting strings when cradling and dodging for maximum, hold while providing an optimal release point and improving ball trajectory vs. conventional offset heads when passing and shooting.

Mid/High Pocket Design – The Sequel laid back profile is engineered for that perfect Zone 4 mid to high pocket and allows for a lightening quick release, superior ball control and maximum feel.

Flex iQ – The Sequel is manufactured with Epoch’s proprietary blend of materials creating a super tough polymer with maximized stiffness and flexibility properties and also UV protection. The Hawk Sequel comes in a iQ of 3.

Composite Injected Polymer – The Sequel to the Hawk is constructed with state-of-the-art materials by utilizing an industry first and proprietary composite injected polymer, providing not only optimal strength and durability but maximum energy transfer for improved velocity.”

Get Epoch and LIVE. PLAY. BE. (Epoch Mantra)