Chumash was created by Rock-it Pocket founder Flip Naumburg in the early 1990’s on the beaches in and near Santa Barbara. Essentially, it’s 3 on 3 lacrosse played on a special goal with no goaltender. We’ve been using it as a teaching tool for local youth leagues and at our Colorado State University Men’s Lacrosse Ram Camp for years with a great amount of success. It’s perfect for teaching youngsters the fundamentals of movement and catching and throwing in a game situation without exposing them to a huge, intimidating field. Chumash goals are also good for running simple drills if you are short on goaltenders. Use your imagination! Rock-it Pocket sells CHUMASH GOALS ready for play or CHUMASH NETS and directions to build your own goal in our online store.

SECTION 1. Chumash is a lacrosse game played with two teams of 3 players each. Each team may (and should) have two substitutes. There is one goal in the center of the field. The purpose is for a team to score on its respective side of the goal. Long sticks are illegal.

A.R. 1 We have found the game to be fun for 2 v two as well as one on one. How could you ever run a happy and productive summer camp without this? 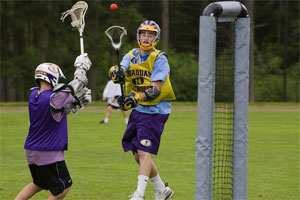 SECTION 2. The Chumash field is 50 yds. long and 30 yds. Wide.  The 6′ high, 12″ wide goal is centered in the crease, and the net shall be centered or sandwiched in the frame to accommodate shots from both sides. 20 yds. from the goal line and 5 yds. from the boundary on each end there shall be a dotted restraining or “take back” line. This area can vary, but there is no “safe” zone. A player can legally push the ball carrier out of bounds for a turnover anywhere on the field.

A.R. 2 Field specifications are a guideline only, and the game can be played just as well with modifications based on capabilities. For example, it is a lot of fun to play Chumash on the beach with two poles buried about 1 foot apart in the sand, and a crease that is obliterated periodically by incoming waves. Make sure that the field is never too ‘narrow’ because the ball will go O.B. too often.

A.R. 3 The fatter the goal pole construction, the better. In a way, with the 4″ pipes we use, it makes it possible for a player to be not that accurate on a given shot, but still hit the post and keep the ball in play, which is a good thing. One rule that is different in Chumash is that when ball goes out of bounds on a shot, it is loss of possession, and not the closest-to-ball thing. The game just plays better that way, and/but it also teaches good shooting lessons at the same time.
As noted, the net shall be centered or sandwiched in the frame of the goal to accommodate shots from both sides. Each team has a side of the goal to shoot at.  This is decided before the game starts. There shall be a restraining or “take back” line 20 (ish) yds. from the goal line and 5 yds. inside each end line. There is no “safe” zone behind the “take back” line.  A player can be legally pushed out of bounds anywhere on the field. A goal counts for one point only.

A.R. 4 Chumash is designed to be as self-regulating as possible to enhance the joy of playing, but we like the 1 ref system. We wanted to make it easy to play a real game of lacrosse anytime, anywhere. You don’t have to have a referee, but you do need to exhibit sportsmanship and fair play. If a call is in question, use a system of alternating possessions. The game was created to be fun and to teach skills, to involve parents and encourage them in teaching their children sportsmanship. It is the kind of game we can use to invite the world to play lacrosse with us. Anybody can play. Skills don’t have to get that far before the novice feels like he or she can really play/start to love the sport of lacrosse.

SECTION 3. The game shall be controlled by one official

SECTION 4. A game will consist of two 7 to ten-minute halves. There are no timeouts if there is a running clock.

A.R. 5 Or you could just play all afternoon, like pick-up bball games or players can get in some one on one practice, etc..

There are two creases in the “Game of Chumash”.  The first is a regular lacrosse goal crease with a nine-foot radius.  The goal is centered inside this circle, and it is governed pretty close to any standard crease. as in stay out of the small crease.  There is no goalie and it is illegal to “guard” the goal in Chumash. No one can go in the smaller crease unless the ball is down in there.  Then, the player may only pick up the ball and leave immediately.  Failure to do so will result in a technical foul and loss of possession. Players can move through the larger crease, but they can never stop inside there and never EVER just move through smaller crease. If ball is on the ground inside small crease, they can go get it and or fight for it, but then they have to get out immediately.

The second crease uses the same arc, just farther out.  The top of the arc is 10-12 yards from the goal line. Twelve is better, but we encourage people/coaches to feel free to adjust that because of age or skill level. The arc at the top of the bigger crease is the same as the smaller one. Players may move through this larger crease with or without the ball.  They may not stop nor may they shoot from inside the larger or smaller crease.  Players can NOT “dive” or land in the crease after the shot, and they may not ever go in the smaller crease.. ever, just the same as the NCAA lacrosse rule book.  If they do, it is a technical foul, and possession is awarded to the other team.

A.R. 1 A player MAY catch a pass inside the larger crease, only if they can then step out of it with a single step, turn and shoot.

it is NOT okay to ever catch the ball inside larger crease unless you are one step from getting out. It is NOT okay to shoot it with feet inside or touching any part of the line of BIG crease. All shots must come from outside the larger crease line in a basketball 3-pointer sort of guideline. High angle shots are low percentage shots.

SECTION 5. Initial possession of the ball to start the game shall be determined by a face-off.  Face off comes from either side of the goal and inside the larger crease. The illustration shows the face off as outside the large crease, and that is acceptable as well. When possession is determined, whatever team wins the draw must take the ball back to its pre-designated “take back” line. The defending team can put pressure on this process, much like riding in field lacrosse. Each team has a player behind the take back line at the start in ‘wing’ positions. On the whistle the wings can run in but cannot enter the crease area until possession is determined.

Again, the team that gains first possession must take the ball back to their own restraining line. If a team fails to do this (shoots at the wrong side for example), it is a technical foul and the ball is awarded to the other team.  Determine each team’s “take back” line before starting play. Players need to pay attention to and recognize the situation in Chumash. We think that is always a good rule of thumb for the process of good decision making development.

A.R. 7 When there is a clear change of possession or any sort of extended scrum and also after the face off as noted, the team with the ball must pass or carry it back to the restraining line in front of their goal, much like 3 on 3 basketball. This adds the dimension of “clearing” and “riding”to the Chumash game, and if players hustle on missed shots that stay inbounds, sometimes they can get ‘fast breaks’ going the other way. If a team fails to do this (take it back to take back line on possession change) it is a technical foul and the ball is awarded to the other team.

SECTION 6. There is no off-side rule in Chumash Lacrosse. 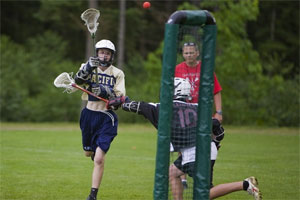 SECTION 7. When the ball is on the ground in the crease, players from both teams are allowed to be inside the designated crease area.

A.R. 9 After possession is gained, the ball must be immediately carried or passed out of either crease/both creases. Failure to do so is a technical foul and loss of the ball.

A.R. 10 DEFENSE When the ball is in possession of team A, a player from Team B (defense) is allowed to be in the crease only if they are continually moving through it while playing his man.  A defensive player (team B) may not take a position to defend the goal while in the crease. A defensive crease violation will result in a man down situation for Team B, as per NCAA rule on a technical foul with possession. 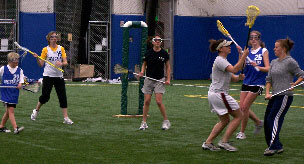 SECTION 8. Most play of the game falls under the guidelines of the NCAA (boys) or USWLA (girls) rule book.

A.R. 12 There are no rules governing time for ball advancement, etc.

A.R. 14 The integrity with which you play brings honor to the game.

A.R. 15 Exception: There is no “brush” call. Any touch of the head or face is an automatic personal foul.

A.R. 16 On a personal foul the ball is awarded at the take back/restraining line. The offended team doesn’t have to clear the ball. The personal foul means a player is out and it is 3 v 2 until the the 3 team shoots twice or scores, or if the defense gets control of the ball and takes it to THE TAKE BACK line. Then the player is released from a tiny substitution box at midfield. 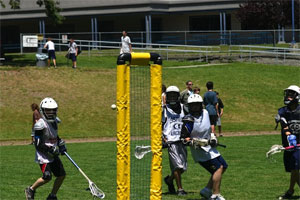 A.R. 17 On a Technical foul, the ball is awarded at the goal line extended, and just inside the sideline. The ball must then be cleared to the restraining line.

SECTION 11. Again, on personal fouls, the offender must go to the sideline until there are 2 shots taken, or until his team gains possession of the ball, or there is a goal scored by the team with the advantage.

SECTION 12. On technical fouls, the offending player must leave the field for 1 shot, or until his team gains possession of the ball, or there is a goal scored by the team with the advantage.

SECTION 13. Leave the field thinking how much fun it was to play and not (just) how you won or lost. Hustle, because it will gain you much inside this game, while being a built in ‘conditioner’ as well that coaches will love.

Rock-it Pocket has nets and directions for goals similar to the ones shown above.