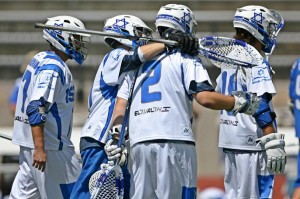 This is what I think: In college, and probably high school as well, there is far too much over-coaching, over-practicing (too many drills, not enough real situations), and also too much focus on the team that ‘we’ are going to be playing. It is hard enough to get them to really connect on the field. After all these years it is still more about HOW WE PLAY, and not who we are playing if you ask me.

I say a team works (and looks) best when it almost appears that they don’t even need a coach because they all know what is happening between the lines at all times, and how/where they fit, rather than standing on the sidelines waiting for Coach to call a line or a name that is theirs during games or practice.

There is way too much sliding on defense, and it is a wonder how teams can play ANY solid defense when they are so busy changing slide packages and responsibilities with every pass by the settled offense they are defending. It is beyond me. The offense has so much advantage in lacrosse, so why do defenses empower offense by trying to do too much? If a defense wants to empower anything…….it is their own GOALIE by just doing their job, which makes HIS most important role easier. That is why teams run to the goalie at the end of every game, isn’t it, or do we even know why anymore? It looks to me like that wonderful sliding team defense that Bill Tierney gave freely to the world (me) in 1997 has mutated into some sort of ugly duckling excuse for defense in many places as we approach 2020.

I tried to post a picture of James Dean, but too much red tape for this old dude.

‘Being Cool’ is an IS thing. One can’t really try to Be Cool. You either are or you are not. I suppose you could have or be “cool”  briefly, but it (being cool) is the net result of his or her many parts or manifestations and mostly not an isolated thing that can be planned or staged, and it often absolutely connects in a single place or moment that has some sort of profound effect on others. Right?

YOU PLAY JUST LIKE YOU PRACTICE (oldie but goodie)

In a team, greatness is a little like coolness. The goal is to win, of course.The goal is to score more than THEM, absolutely. Talent and maybe a star or two are nice to have on a team mix, no doubt, but the truth is if you/individual players focus mightily on the ‘manifestations’ that are the components that give teams their own identity and the map with the route to where the team needs to go to be individually great. It is of course cool when you get there.

And what is great about sports is that at the end of the proverbial day “Cool” will show up on that board with the crooked numbers, and if you are the coach the bottom line will make you smile.